Your source of A & P Webinars, Study Guides, Quizes, and More!

Most of the cell’s microtubules originate somewhere near the cell’s nucleus at an area called the centrosome. The centrosome is where microtubules are organized, and can also be constructed/torn down. It is from here that the polar and kinetochore microtubeles (mitotic spindle, which we will discuss at length in the mitosis section) originate. Within the Centrosome’s grainy looking matrix is a pair of centrioles. Centrioles are non membranous barrel shaped organelles composed of nine triplets of microtubules each (see image). These centrioles are organized at right angle to eachother. Besides being found in the centrosome, centrioles are found at the bases of cillia and flagella 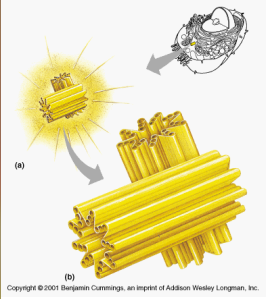 Cilia are thin, hairlike cellular extension that can move. Using motor proteins, cilia can propel substances across the free surface of epithelial tissue. One example is the cilia that line our respiratory tract and propel mucous up and out of our respiratory system. Cilia are formed when a centriole divides and the new centriole migrates towards the cell membrane. Once at the membrane it generates microtubules which push upwards into the cell membrane. As the membrane protrudes and expands, cilia are formed. A special type of cilia called a primary cilium is found in many types of cells. This cilium does not propel substances but is used rather to probe the external environment using the sensors scattered throughout its membrane.

Flagella are very similar to cilia, but much larger. Flagellum are used to propel cell’s rather than move substances, as  is the case with cilia. The only example in humans of flagella are sperm cells.

Microvilli are small but numerous extensions from a cell’s apical or free surface. This type of cellular extension is common in tissues that absorb things, such as the simple epithelium lining the intestinal tract. The presence of microvilli greatly increases the surface area that cells and tissue can use to absorb substance. Unlike cilia and flagella which are composed internally of microtubules, microvilli get their form and shape from actin, specifically from actin protruding out of the terminal web.

Before we dive into the inner workings of the nucleus lets examine its membrane, the nuclear envelope. This envelope has two layers of phospholipids, much like the mitochondrial membrane. The outer layer connects to the rough endoplasmic reticulum, while the inner layer is packed with lamin proteins that give the nucleus strength and shape while helping to organize DNA in the nucleus. Scattered throughout this double membrane envelope are nuclear pores that allow certain substances to pass in and out of the nucleus. Large proteins and mRNA molecules pass through the pores using an energy dependent process, while smaller solutes diffuse in and out of the nucleus passively. Contained within the Nuclear envelope is the nucleoplasm. Let’s check that out next.

The Cell Cycle and Cellular Division

The Cell Cycle: The cell cycle can be compared to a human beings lifetime. Cells are “born” they grow, and then they produce. Some cells grow very quickly and reproduce many many times, while others grow slowly, or perhaps seldom/never reproduce. At a very basic level we can divide the cell cycle into two very distinct phases: Interphase, and the mitotic phase (cellular division phase)

Thats it guys, stay tuned for part 3 where we will talk about the mitotic phase and protein synthesis.