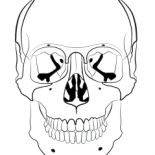 Your source of A & P Webinars, Study Guides, Quizes, and More!

The Cell has three basic parts. A nucleus, plasma membrane, and everything in between: The Cytoplasm.

The Cytoplasm is made up of three components as well.

Cytosol: Mostly water, the cytosol is the fluid that suspends all of the other cytoplasmic elements. Dissolved in this watery fluid are all of the substances necessary for cellular function, salts, proteins, sugars, and other substances.

Inclusions: Inclusions may or may not be present in a cell depending on the cell’s type and function. Inclusions are chemical substances stored in a cell’s cytoplasm. Examples include lipids stored in fat cells, and glycogen stored in liver cells.

Mitochondria: The mitochondria produce the cell’s primary metabolic fuel source, ATP. The Mitochondrion has a double membrane, the outer being smooth and the inner membrane being highly folded and shriveled in order to increase surface area. It is on this membrane that ATP is produced from glucose in a process called kreb’s cycle. Mitochondria are probably the most unique organelles because they contain their own DNA, RNA, and ribosomes. These components allow them to self-replicate and produce some of their own proteins involved in mitochondrial function. Mitochondrial DNA (37 genes) closely resembles DNA of bacteria in the purple bacteria phylum. For this reason it is widely believed that long ago mitochondrial ancestors invaded early plant and animal cells, forming a symbiotic relationship that gave rise to all of the complex cell types we know today.

Endoplasmic reticulum: The endoplasmic reticulum is a network of tubes and flattened fluid filled membranous sacs called cisterns. This membranous network has a smooth and a rough component. The Rough ER is studded with ribosomes giving it its rough appearance. The rough Er is responsible for packaging newly synthesized proteins for export to the golgi apparatus, and eventually out of the cell. The smooth ER has no ribosomes, and is involved in lipid metabolism. Additional functions of the endoplasmic reticulum are the production of plasma membrane and the production of peroxisomes.

Golgi Apparatus: The golgi apparatus is made up of stacks of membranous sacs. One side of the apparatus (the cis face) receives incoming vesicles from the rough ER. After packaging and further proccessing the incoming proteins, they depart in vesicles form the opposite side of the apparatus (the trans face). After departure, vesicles can be excreted from the cell in secretory vesicles or incorporated into other membranes throughout the cell. One last function of the golgi apparatus is to package digestive enzymes into vesicles called lysosomes.

Lysosomes: Lysosomes are the digestive machinery of the cell. Essentially vesicles packed with digestive enzymes, these organelles bind with vesicles containing material destined for digestion (debris, damaged organelles, bacteria, viruses, glycogen and other metabolic materials) and fuse, expelling their digestive contents into the newly formed larger vesicle, thus digesting the material. Additionally,  by self rupturing, lysosomes can also be used to destroy the cells of non useful tissue.

Peroxisomes: Like lysosomes, peroxisomes are spherical membranous vesicles that contain many different enzymes. The most powerful and important of which are oxidases and catalyses. These enzymes neutralize alcohol, formaldehyde, and most importantly, free radicals. Peroxisomes convert free radicals into hydrogen peroxide which is then converted to water. You can expect to find lots of peroxisomes in liver cells which are highly involved in detoxification. Unlike lysosomes, which are produced by the golgi apparatus, peroxisomes are produced by special machinery in the endoplasmic reticulum.

The Nucleus: The largest organelle, the nucleus is essentially a container for our genetic material. Surrounded by the nuclear envelope, which is made up of two membranes separated by fluid, the nucleus contains the nucleoli and chromatin.

Ribosomes: Composed of protein and ribosomal RNA, ribosomes are are really made up of two smaller subunits. These sub-units latch onto mRNA molecules and synthesis proteins by combining free floating amino acids in the cytoplasm and assembling them into peptide chains. Ribosomes can either be free floating in the cytoplasm, or bound to the rough ER in order to produce ribosomes for exportation from the cell

Cytoskeleton: Cell’s like the human body have sort of skeleton responsible for providing strength and support and providing a site for protein motors to produce movement. This cytoskeleton is composed of three types of rods, as well as motor proteins, and centrioles.

Centrioles: Centrioles are barrel shaped non membranous organelles oriented at a 90 degree angle to eachother and located in the centrosome or cell center. Microtubules are assembled and dissambled here and radiate outward like bicycle spokes from the centrioles. Centrioles play an active role in mitosis which will be discussed later in the cell cycle quick review.

Feel free to ask questions, I’s sure you have many!

2 comments on “The Cytoplasm”